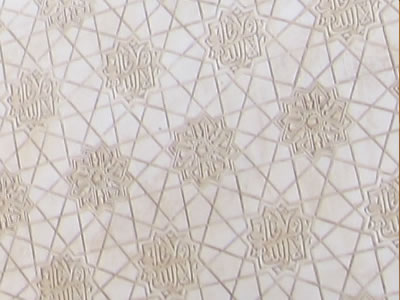 The images below feature examples of applied tessellations. These images were taken on a trip to the Andalusia region of Spain. Here, in cities such as Córdoba, Granada, and Seville, you can view stunning examples of architecture featuring tessellations. Many of these reflect the influence of the Moors, who occupied southern Spain for several centuries. Their strong geometric designs were combined with arabesque lettering and floral motifs and co-existed with ancient Roman, Christian, Jewish, and Gothic traditions in architecture and design. These tilings can be found on floors, walls, ceilings, columns, and any other available surface. Centuries after their creation, they appear absolutely modern and timeless.

All images by K. Vagts.